Inspiration for the Oak Park River Forest Community Foundation came from concerned citizens: attorney Moore Peregrine, businessman Bob Follett, Oak Park Village attorney Art Thorpe, and others. Their initial goal was to improve derelict housing: in the mid-1950s residents watched a grand Victorian home along Oak Park Avenue deteriorate. Although that house was demolished before sufficient funds could be raised to save it, a small group of civic leaders and key donors forged ahead to create an organization that looked beyond housing to a broader desire to preserve the integrity of our villages.

The Foundation was originally created as a charitable trust among five local banks on December 10, 1958, at a gathering attended by both village presidents, the high school superintendent, directors of the Chamber of Commerce and the Community Welfare Council, and representatives from each of the five local banks. 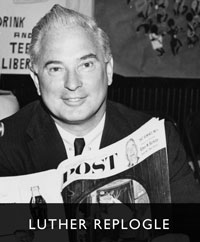 In May 1960 Luther Replogle, the Foundation’s first president, celebrated the Community Foundation’s official launch, noting, “Our board of directors is confident that the Foundation will be of great help in solving community problems and aiding many worthy projects in the years ahead.”

The assets remained in trust but it was not until 1986 that community impact began on a significant scale, with the election of Nancy Follett as president of the board. The board decided that the Foundation should become more active in addressing long-term needs of area charities. Follett recruited Ann Pepper to serve as the Foundation’s first executive director who worked part-time out of her home from 1989 to 1993. By 1994, the Foundation’s assets had increased to slightly under $500,000.

An important change began in the mid-nineties, with a shift from a trust structure affiliated with the five local banks to a corporate not-for-profit structure. The new structure provided greater flexibility in the Foundation’s ability to accept gifts and manage funds.

With these changes, the Foundation began awarding more project grants in the community. The Foundation strengthened its relationships with community organizations in other ways, too. When Family Services (now Thrive Counseling Center) wanted to launch an endowment program, for example, the Foundation served as a repository for contributions and fund management. During the late 1990s, the Community Chest placed its endowment with the Foundation, as did the Nineteenth Century Club and the Oak Park-River Forest High School Scholarship Fund.

In 2005 the Community Foundation established the “Making a Good Gift Better” program.  Funded by an anonymous donor, it encouraged organizations to strengthen their operational and development capacities by building permanent endowments to attract planned gifts and provide ongoing, predictable revenue streams. Thirteen agencies participated, ranging from the Animal Welfare League to the Wonder Works Children’s Museum, resulting in more than 600 donors contributing to a net increase of $573,000 in local agency endowments. Currently, thirty local social impact organizations have funds with us.

Also in 2005, another opportunity arose for the Oak Park-River Forest Community Foundation. The Community Foundation was one of an initial eighteen community foundations in Illinois to be chosen for a Communityworks grant tendered by the Grand Victoria Foundation. Community members rose to meet this challenge grant, culminating in the Communityworks endowment fund of $4.5 million at the Foundation. Through an advisory board comprised of institutional and civic leaders, Communityworks has established an environmental sustainability plan for both Villages (PlanItGreen), the Community Leadership Program in the Brennan School of Business at Dominican University and the Success of All Youth community collaborative, empowering every youth in our community to reach his or her full potential.

In 2011, the Foundation became a trustee of the Russell and Josephine Kott Memorial Charitable Trust. The Kott Memorial Charitable Trust, created through Josephine’s estate plan, honors Russell and Josephine Kott, provide annual funding to support a range of charitable organizations improving the lives of individuals, with an emphasis on services for older adults. The Trust supports the Kott Gerontology Institute (KGI), now a supporting organization to the Foundation. KGI supports training and research in gerontology. The KGI Kott Gerontology Scholars Program trains and prepares interns in skills for a career focused on creating and delivering services to senior citizens.

In 2013, the Foundation further enhanced its programming for area social impact organizations through Impact Excellence, an ongoing series of seminars, conferences and training to build organizational capacity.

In 2015, three giving groups were established: Entrepreneur Leaders in Philanthropy, NextGen Leaders in Philanthropy and a new focus for Women Leaders in Philanthropy, celebrating its 20th year. These giving groups provide collective impact grantmaking by individuals with similar affinities. Today, gifts and bequests comprise the Foundation’s grantmaking and other endowments, donor-advised funds enable donors to guide giving according to their interests, endowments held for area nonprofits support their operations, and organizations like the Rotary Club and high school alumni groups award enrichment and educational scholarships to nearly 200 students a year.

In 2018, Antonio Martinez, Jr. became president and CEO of the Foundation. Today, gifts and bequests comprise the Foundation’s grantmaking and other endowments, donor-advised funds enable donors to guide giving according to their interests, endowments held for area nonprofits support their operations, and organizations like the Rotary Club and high school alumni groups award enrichment and educational scholarships to nearly 200 students a year. The Oak Park-River Forest Community Foundation now manages nearly $33 million in assets – not including the Kott Memorial Trust. We remain committed to helping maximize donors’ philanthropic giving to its fullest potential.

In 2020, the Foundation created the Rapid Response and Recovery Fund to mobilize more than $1.2 million in resources in response to the COVID-19 pandemic, providing vital funding to provide desperately needed dollars to agencies fighting to provide daily, ongoing support to our most vulnerable neighbors: those struggling with food insecurity, permanent housing, and health concerns.

As we look to the future, the Oak Park-River Forest Community Foundation offers leadership and a platform for community stakeholders to collaborate and address overarching issues; provides philanthropic advisory services to donors and manages charitable assets on donors’ behalf; and helps area nonprofit organizations and programs succeed through training sessions, capacity grants and community grants in the areas of education, youth development, housing stability and homelessness, arts and culture, and health. We seek to unify and inspire community members to mobilize resources to advance a racially just society in which all members of our community thrive and prosper.